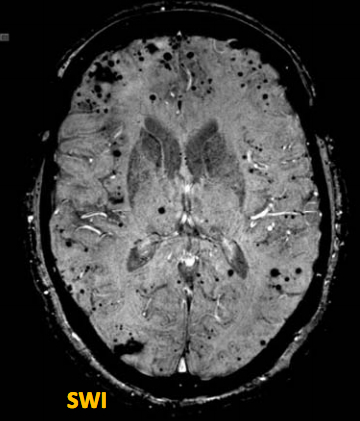 SWI image. Pathology is shown where the deep black holes appear on this scan.  This scan is used for demonstrative purposes as it has far more pathology than would be seen on a post-concussion scan.

Thus, the quest for the Holy Grail for a bright line tool to prove concussion is ongoing.  SWI is the most tangible of the new MRI techniques to prove a mild brain injury, even though it is abnormal in fewer cases than other developments such as DTI.  On our previous page, we discussed the hemosiderin trace brain bleeds is leave behind.  Ten years ago, GRE (gradient echo imaging) was the state of the art in imaging those hemosiderin stains. Yet in an overwhelming percentage of MTBI cases, the GRE was normal.  Gradient Echo Imaging was to be the breakthrough technology. It has had little value in MTBI cases.

SWI is searching for the same thing as GRE but is a huge leap forward because it is five times more sensitive than GRE.   SWI tunes the magnet to detect microhemorrhages where conventional MRI cannot.  Like Gradient Echo Imaging, it images the hemosiderin staining on brain tissue.   [1] The puzzle is whether five times better is enough when you may be talking about multiplying zero. If no hemosidrin deposits show up in even complicated MTBI cases, it may very well be that the kind of bleeds that leave hemosiderin behind are not the principal culprit in the MTBI. Time will tell.

The exciting part of an abnormal SWI in a post-concussion case is that almost anyone can tell what they are looking at on a SWI image.  Lesions on conventional MRI are fuzzy and small, with the contrast color between the whiter gray of lesion versus the darker gray of the surrounding matter, difficult to see. It is even harder to see such abnormalities when shown on a projector in a well lit room. Radiologists work on high resolution monitors in dark rooms.  But with SWI, the abnormalities are a dark black. There is no mistaking the dark black holes shown on the SWI to the right.

Of course the SWI image to the right is not a MTBI scan. Still, even three to five holes comparable to the smaller holes shown on this scan, would show significant pathology in a MTBI.  So in the cases where the SWI is abnormal, it should be a simple matter to show that to demonstrate that pathology on the scan.

Next – Dilated Perivascular Spaces Are Evidence of Brain Injury

[1] From testimony of Ronald Benson, M.D. of Wayne State University to Congress in January of 2010.