Physical deficits after brain injury is the part that Hollywood forgets in its coma/amnesia plots.  Those who survive extended coma usually wake up, not only to memory problems, but having to relearn so much about how to use their bodies. Further, severe brain injury not only injures the cognitive parts of our brains, it often injures the motor system.  The motor system is the part of the neurological system that operates the muscles.  Motor system damage can also include not just our extremities like our arms and legs, but also the muscles of the throat, the eyes, the face.  Thus, the physical deficits after brain injury may include difficulties with speech, with vision, with something as important to who we are as a smile. 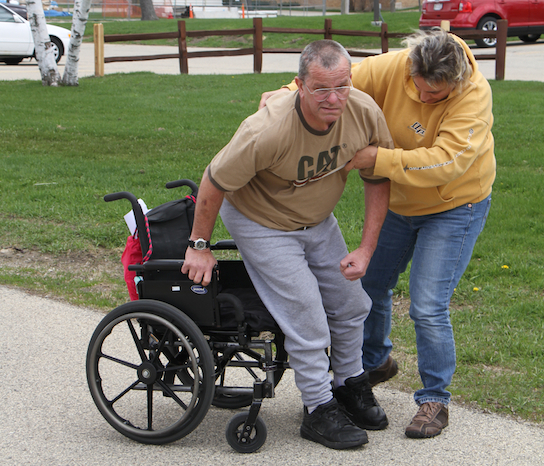 Physical deficits after brain injury pose a significant challenge in rehabilitation. Here, Mike’s wife demonstrates helping him out of his wheel chair. Note the strap to assist.

Physical deficits after brain injury may also occur not from brain damage, but to localized injury to other parts of the body. The nature of the kind of accidents where brain injury occurs, often involved multiple traumas.  The kind of blow that can cause a severe brain injury, might fracture a bone, damage an organ. Our TBI Voices story about Mike (above) is an example. From his wife describing his physical injuries:

His whole body swelled up.  His chest was totally black and blue.  He fractured the side of his face and his jaw.  His right eye was swelled shut.  It was very, very bad.  They had his head wrapped every day with layers and layers of gauze.

The problem in mild brain injury is that the orthopedic (bone) injury gets all of the attention.  In a severe brain injury involving coma, sometimes those injuries go undiagnosed, because the injured person is not capable of complaining about the injury. Thus, it is important that a thorough physical exam is done on someone in a coma, to make sure that the physical deficits after brain injury get attention, even while the coma persists.  With Mike, there was an undiagnosed broken clavicle.

His wife tells us more about his physical deficits after brain injury:

Mike needs help walking.  He is now right-handed.  He was left-handed for 51 years.  He wears glasses all the time.  He never wore them all the time.  He needs help getting dressed, bathing and putting his shoes on.  He had a bad ankle before but it’s gotten worse because he wasn’t able to use it for the two months.  He’s got to have special shoes for the brace on his left foot. that has to fit inside of his shoe.

Next – Relearning to Walk After Brain Injury