Neuron – the Core Element to the Brain and its Functioning

The Neuron – The Core Brain Cell

Shown is a neuron, including the axon, cell body and dendrites.

If you are sitting in an emergency room because of a coma or severe brain injury, you are worried about the “big stuff.”  You have been told your loved one is in a coma because there is a bleed, because there is brain swelling, or likely an increase in intracranial pressure. You are understandably more interested in what the “dura” means with respect to a subdural hematoma, than things as tiny as a neuron.  Yet, not only is the neuron at the core of the central nervous system, understanding what the neuron does and how it gets injured is core to understanding what the brain should be doing and what it may have trouble doing now.

The skull, the dura, the cushioning cerebral spinal fluid, are there to protect the microscopic cells of the brain.  Neurosurgeons talk about injuries to brain structures and intracranial pressure, not only because such can cause brain damage, but also because they are big enough to see and to do something about.  But the reason they are doing something about these larger things, is to protect the little things, the microscopic neurons and other brain cells. If they don’t control the pressure, then the capillaries get closed off and neurons die.  If they let the blood seep into the wrong places in the brain, neurons die. If they can intervene to stop the big things, then the better chance the neurons survive.

The brain is the most complex computer nature can evolve and the neuron is the nano chip that makes that computer go.  Computers work because the computer chip will have millions of tiny electrical connections, where a go/no go (one’s and 0’s)  signal will be sent. This choice of a one or a zero is called a “binary” choice.   Any key stroke in a word processor, any digital photograph, any music recording will be seen by the computer as a long combination of one’s and zero’s.  The computer reads this code to mean what it is intended it to mean.  Programmers have trained the machine to translate the binary code into the end product we desire.  The more complicated that file, the more one’s and zero’s it takes to make that file.

The brain too has electrical connections.  These impulses have been programmed over life, by life to interpret and control all that human beings do and are. But unlike the simple binary hard wired circuits, the brain’s circuitry has at its core, the not so simple neuron.  Computers get faster not by making the digital connection more complicated, but by adding more connections. Speed and complexity are increased by more and more and smaller and smaller.

The neuron is a far more brilliant component.  It communicates not in ones and zeros, but more likely in a code as complicated as our alphabet.  It is not a bilateral connection, but one in which a single cerebral cortex neurons may have billions of connections with other neurons.  While our current technology is approaching the capacity to make digital connections as small as a neuron (perhaps 2,000 on the size of a pen) we have yet to nuance the multiplicity of a more complex code.  In the early part of the 21st century, it is unfathomable we could ever make computer coding as complicated as that of a single neuron.

What is a neuron? They are cells of the brain that are responsible for the information transfer, both with the neuron itself and between other neurons. A neuron has these components:

While each neuron may have only one Soma (the processing part of the cell), the ending of both the axon and dendrite are so complex, the below picture is only useful to grasp the parts, not the complexity of the way in which it operates. This diagram is like a map of the United States which only showed the Mississippi River, the Great Lakes, Chicago, New York and Los Angeles.  The actual difference between what is shown below and what exists is comparable to the difference between such a map and a map showing every road, every home in the U.S. See http://s8int.com/article-six-brainpower.html for some comparison’s of how a computer and the mind process and store information. 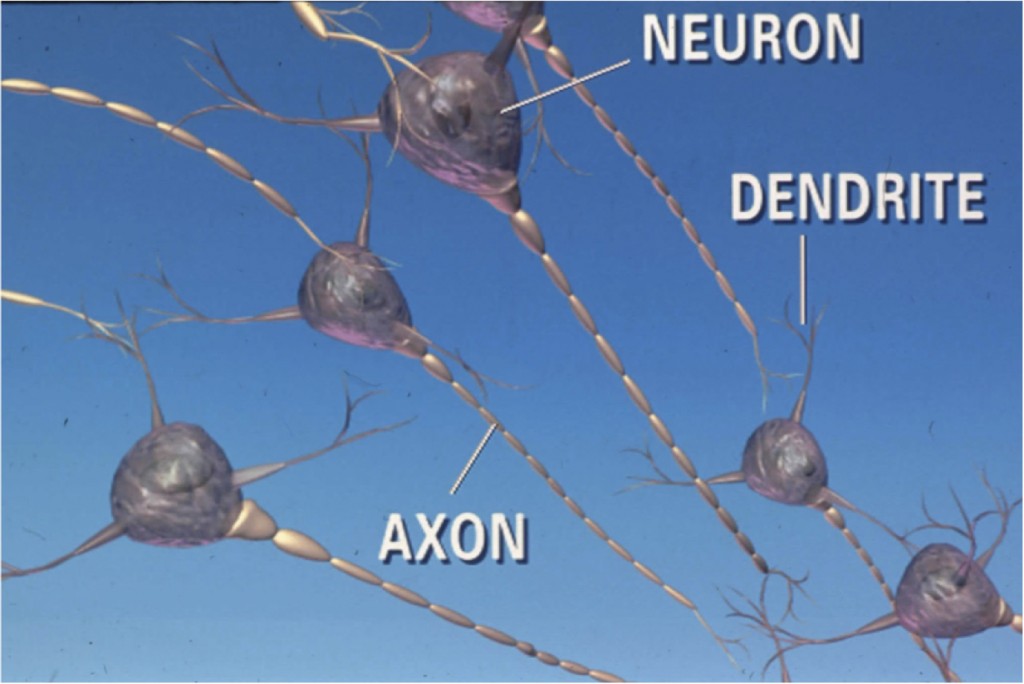 Shown here are a few neurons, with the cell body (the Soma) being the bulb in the center, with the dendrites being the strings coming out the top and the axon, the long sausage link like extension out the bottom.

To understand what a neuron is, it is important to understand what a neuron does. It first makes a choice or records an input (but infinitely more complex than the binary choice a computer chip makes), preserves some aspect of that choice in its memory and then communicate that choice down its axon to other receiving cells neurons.   It does all of that while simultaneously processing the input from the neighboring cells across the “synapse.”  How that choice is processed and remembered is as much about the synapse (the “synaptic junction”) as it is about the neuron itself.

The synapse is the gap between the end of one cell’s axon and the beginning of another cell’s dendrite.  It is a minute gap through which neurotransmitters and other neuroactive molecules pass. A single neuron may have thousands of synapses.  The brain uses both chemical and electrical signaling, with the chemical signaling to be more likely in neuron to muscle connections (motor neurons) and the electrical signaling more likely in the neuron to neuron connection. Regardless, it is the sum total of the synaptic network of surrounding cells, that create human thought, perception, action, memory and behavior.

Within brain injury circles, too much of the cellular focus is on the axons role in diffuse axonal injury. Admittedly, understanding diffuse axonal injury is a key element in any lesson of neuropathology.  And we will address that next. Yet, the failure to focus on synaptic disruption misses the most complex and important aspects of the cellular injury.  More important for you who “wait”, it misses the greatest hope for brain injury rehabilitation – the brain’s capacity to reconstruct those networks, despite permanent neuronal loss.

Next – The Axon and Axonal Tracts