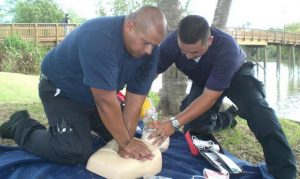 Induced hypothermia has been added to the American Heart Association guidelines. It could be beneficial at preventing brain damage after cardiac arrest. (Flickr / Creative Commons / eachavez2)

The cortex is most likely to be injured during a heart attack. The brain stem is more protected when it comes to lack of blood flow to the brain. However, this combination of brain damage can cause comatose and vegetative states.

The first study to use humans to study induced hypothermia was in 1997 by Bernard and colleagues. They studied 22 cardiac arrest survivors who were cooled using ice packs for 12 hours in the ICU. In 1998, Yanagawa and colleagues studied 13 patients who were cooled to 33 degrees using cooling blankets and convective heat loss through alcohol evaporation. Both studies showed a therapeutic benefit to the treatment and paved the way for future clinical trials.

Future studies showed further the benefits of induced hypothermia. People in the hypothermia groups were more likely to have better outcomes. Following these studies, the American Heart Association published guidelines for CPR and Emergency Cardiovascular Care. Unconscious adult patients who have been resuscitated following out-of-hospital cardiac arrest should be cooled to between 32 and 34 degrees celsius (89.6°F–93.2°F) for 12 to 24 hours when the rhythm started with a fast, inadequate heartbeat, known as ventricular fibrillation. Hypothermia can even be beneficial to people outside of this group, such as in-hospital cardiac arrest.

It is unclear why men may receive better treatment than women after cardiac arrest. “We need a paradigm shift,” Dr. Suzanne Steinbaum, director of Women’s Heart Health at Lenox Hill Hospital in New York City told the St. Louis Post Dispatch. “There has to be an understanding that women need to be treated as aggressively as men when it comes to heart issues.”

It is not just the lack of oxygen that causes damage to the brain after the blood flow is disrupted when the heart stops beating. Blood flow involves not just bringing oxygen to the cell, but also nutrients and even more important, removing the toxic leftovers of the cellular combustion. The cell can survive for a time without oxygen and nutrients. But what becomes toxic almost immediately is the failure to remove the waste products. Once the glucose has been converted to energy, what is left behind is as toxic as the smoke from a fire. If those byproducts aren’t removed, cell death happens quickly. The advantage of hypothermia, is that it cools the toxic byproducts, reducing cell damage.