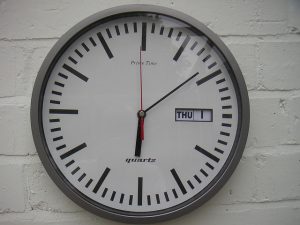 Shift work can mess with people’s biological clocks. This can have the effect of worsening strokes. (Flickr / Creative Commons / Lee Haywood)

The waking up and going to sleep at radically different times can cause more severe ischemic strokes. This kind of stroke is caused by a blood clot that stops flow of blood to the brain. About 87 percent of all strokes are ischemic, according to the CDC.

This has the potential to affect a great deal of people in this country. About 15 million people don’t work the regular nine to five schedule in this country, according to the study’s press release.

Stroke is a major cause of disability in this country, with about 800,000 people having strokes each year, according to the CDC.

“The body is synchronized to night and day by circadian rhythms—24-hour cycles controlled by internal biological clocks that tell our bodies when to sleep, when to eat and when to perform numerous physiological processes,” said Dr. Earnest, Ph.D., professor in the Department of Neuroscience and Experimental Therapeutics at the Texas A&M Health Science Center College of Medicine, in a press release. “A person on a shift work schedule, especially on rotating shifts, challenges, or confuses, their internal body clocks by having irregular sleep-wake patterns or meal times.”

The study found that those on the shift work schedule had more severe brain damage and loss of sensation or limb movement than those in the control group on a regular 24-hour day and night schedule.

Strokes cost the country about $34 billion each year, according to the CDC.

The study also found sex differences. The gravity of the stroke outcome for swing shift workers was much more severe in women than in men. “These sex differences might be related to reproductive hormones. Young women are less likely to suffer strokes, as compared with men of a similar age, and when they do, the stroke outcomes are likely to be less severe. In females, estrogen is thought to be responsible for this greater degree of neuroprotection,” said Farida Sohrabji, Ph.D., also a professor in the Department of Neuroscience and Experimental Therapeutics and director of the Women’s Health in Neuroscience Program, in a press release.  “Essentially, estrogen helps shield the brain in response to stroke.”

High fat diets were also considered problematic for cerebrovascular disease. This kind of disease is where blood flow affects the brain like it does in strokes. It can increase the inflammation in the body and alter the body’s clocks.

“Next we would like to explore whether inflammation is a key link between circadian rhythm disruption and increased stroke severity,” Earnest said. “With this information, we may be able to identify therapeutic interventions that limit damage after a stroke in patients with a history of shift work.”

It’s important even if sleep is irregular to try to maintain regular mealtimes, as well as avoiding high fat diets, tobacco use, and inactivity.