Was Muhammad Ali’s Parkinson’s due to Boxing? 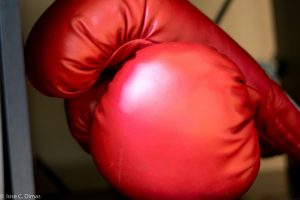 It’s worth asking whether or not Muhammad Ali’s boxing contributed to his Parkinson’s Disease. (Flickr / Creative Commons / J Dimas)

As we mourn the loss of Muhammad Ali, a question comes up. It has been asked in the news, including PBS and Aljazeera. It should now be a matter of a presumptive diagnosis that his Parkinson’s was caused by the head trauma he endured during his boxing career.

The book “Neuropsychiatry of Traumatic Brain Injury,” edited by Jonathan M. Silver, M.D., Stuart C. Yudofsky, M.D., and Robert E. Hales, M.D. (1994, American Psychiatric Press) made a statement with regard to this question.

“The occurrence of a subcortical dementia with extrapyramidal features in professional boxers was described by Martland in 1928. The association between repeated minor trauma and the development of a subcortical dementia, now well-established, gave rise to the notion that head trauma may be causally related to other primary degenerative disorders, specifically Alzheimer’s disease and Parkinson’s disease.”

“Later on, in severe cases, there may develop a peculiar tilting of the head, a marked dragging of one or both legs, a staggering, propulsive gait with the facial characteristics of the parkinsonian syndrome, or a backward swaying of the body, tremors, vertigo and deafness. Finally, marked mental deterioration may set in necessitating commitment to an asylum.”

Some would say that the data linking Parkinson’s disease with head trauma is not conclusive despite the fact that Parkinson’s symptoms exist in patients following traumatic brain injury.  We believe that an autopsy of Ali’s brain would help to dispense any remaining doubt. The key issue that was missing in the dementia pugilistica research done before Omalu’s autopsy work in 2002, was autopsies of the demented boxers.

While environmental factors and genetics may also lead to the end result of Parkinson’s disease, that doesn’t mean that repetitive trauma like seen in a boxer or football player shouldn’t be the presumptive cause with those who have had thousands of subconcussive hits wind up with the disease. A recent study has made strides in discovering the biomarker that signals CTE in patients. In combination with repeated concussions and head trauma, a genetic biomarker may also predispose a person to having Parkinson’s disease.

The National Institute of Neurological Disorders and Stroke is devoting some of its research to finding the genetic biomarkers for Parkinson’s Disease.

Dr. Julie Andersen, Ph.D. has written several articles about Parkinson’s Disease. “Most cases of Parkinson’s disease are sporadic, meaning there is no clear cut family history, in approximately 95 percent of all cases, but genetics can be involved.,” said Dr. Andersen in our interview with her. “There is also believed to be an environmental component which can include previous head trauma.”

The boxing ring is the type of environment where neurological disease is likely to flourish. It is time to stop hiding behind the theory that nothing can be proven without an autopsy. But when we have the potential of autopsy to illuminate these types of diseases, it is terribly important that medical science gets the chance to take this look under the microscope.

Youth Concussions Underestimated How to measure awareness in coma