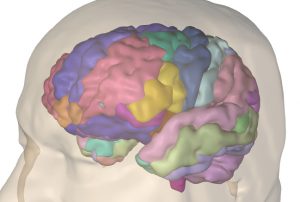 We wrote a blog yesterday about the researchers that discovered about 100 new areas of the brain. They created a brain map, updating one that was more than a century old. They detailed about 180 parts of the brain per hemisphere.

Matthew F. Glasser is a neuroscientist at Washington University School of Medicine and lead author of this research. We spoke to him about the new research. Here’s what he had to say.

Q: What is the purpose of this research?

A: Our goal was to make a better map of the brain’s cerebral cortex, the 1.6mm-4mm thick sheet that covers the outer surface of the brain that makes it look wrinkly.  The cerebral cortex is where human higher cognitive functions like language or tool use are based.

This map can replace what is still the field standard, a map of just under 50 areas made in 1909 by Brodmann.  There are four unique aspects of this study relative to other cortical maps that come before it.

1) We used hundreds of precisely aligned subjects to have a sharp, group average maps for the parcellation.

2) We used multiple measures of cortical organization, including architecture, function, connectivity, and topographic maps (e.g. maps of visual space or the body surface).

3) We carefully compared our areas to those in the neuroanatomical literature, finding 83 areas that had previously been identified and 97 new areas.

4) We used a machine learning algorithm to learn the fingerprints of each of the cortical areas, that is their pattern of architecture, function, connectivity, and topographic maps.  This algorithm was able to identify these areas in individual subjects that were not a part of the original parcellation or the training set.

Q: What do you hope to accomplish with it?

A: We hope to help other brain imaging investigators know which brain areas their functional activations are in.  This will help them to compare with their colleagues studies and know whether they are finding the same brain areas, neighboring brain areas, or farther away ones.

Q: What are the real-world applications of this study?

A: One clinical application of the study is that neurosurgeons could use this map and the algorithm to identify brain areas in individual patients.  That way they could avoid areas important for movement or speech production or understanding.

It is clear that this research is new and interesting and can help people in the neuroscience field know different areas of the brain. However, this is just the first round of data. The next version of the brain map may be improved as more scientists become involved and the researchers get more data.

BPA Linked to ADHD in Boys? Evidence that BPA is a Harmful Substance