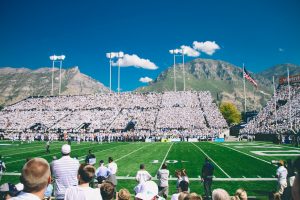 Repeated head injuries as in football can cause CTE. Researchers are hoping to find a biomarker that could aid in diagnosing CTE while the person is still alive.

A new study is searching to find biomarkers that would make it possible to identify those most at risk for developing chronic traumatic encephalopathy (CTE). Football players suffer repeated head trauma and some of these individuals develop CTE, while others do not. Identifying those at risk during life is critically important because with detection and diagnosis comes the possibility of prevention.  The more we know about the course of the disease, the better the chance of effective treatments.  Researchers are looking for an answer to why this occurs in some but not others and one area may be a genetic predisposition that tips the balance.

Dr. Martha Shenton is one of four principal investigators that is conducting the study. She is studying people at Brigham & Women’s Hospital. She is doing so by using neuroimaging techniques to study the brains of former pro football and university football players.

“The hope is to be able to diagnose CTE while people are alive,” Dr. Shenton said in our interview with her. The researchers are looking for both predictive and protective factors of CTE. The findings from this study may make it possible to help someone decide whether or not the risk is worth it. If someone is considering playing football, doctors could look to see if they are predisposed to CTE based on possible study findings. Then, the player “might want to think twice” before playing football, Dr. Shenton said.

The researchers are using PET imaging including a tau ligand called T807, which traces the deposition of tau protein in the brain. PET scans involve nuclear medicine technology. A radioactive isotope is injected into the blood and the PET scanner can create a roadmap of where blood went prior to the time a person is put in the scanner. When the blood flow map that is created is unusual, a key to abnormality exists.

Currently researchers primarily diagnose the disease of CTE based upon an after death examination of where the tau protein deposition is found.

“In any disease, the goal is to find markers that predict and markers that are related to a specific illness,” Dr. Shenton said, citing Alzheimer’s and cancer as examples.

Subjects in the study will be tracked for three years in Arizona, Las Vegas, New York, and in Boston at BU and at Brigham and Women’s Hospital. The subjects will have brain scans, blood work, collection of saliva samples, neurological exams, and psychiatric screenings in addition to family history and drug and alcohol history. The hope is to find a biomarker in the blood, saliva, and brain scans to aid in diagnosis of CTE while the person is still alive.

While as far as the presence of Tau, we agree that post mortem examination is now the gold standard for the diagnosis. But CTE is just another of the dozens of neurological diseases where the changes in mood, behavior and cognition, fit established clinical patterns. While the PET research will add another piece to the precise understanding to the pathological underpinnings of the disease, clinicians should not be waiting for the magic diagnostic tool to call this disease. Brain diseases are not diagnosed by neuroimaging. Neuroimaging is a valuable resource to add to the clinical picture. It helps, but diagnosis must begin and end with an assessment of the change in the person.