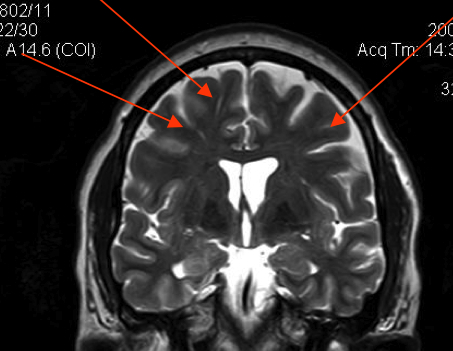 Even though the 3T scans allow us to see these bright spots much clearer, the term “Dilated Perivascular Spaces” is still being used to describe lots of very different types of pathology, or even normal variants.  All brains have perivascular spaces.  It is only when a neuroradiologist deems them dilated, do they have relevance for diagnosis.  In most people, these spaces around the blood vessels are very small.  When they enlarge, they may indicate that the brain has lost substance.

When the brain loses substance, what fills into the empty space is cerebral spinal fluid, essentially water.  The MRI can differentiate this fluid from brain cells.  The brain mass that is lost that shows up as a Dilated Perivascular Spaces,  is the white matter of the brain.  Dilated Perivascular Spaces are principally places where the axons and the myelin sheath used to be. The myelin sheath is the insulation like substance that protects most axons in the brain.

What is being seen with Dilated Perivascular Spaces is not damage to individual axons, but damage to axonal tracts, concentrated in a specific area.  With the 1.5 T scanners, concentrations of pathology as small as 2mm could be seen.  With 3 T MRI, concentrations as small as 1 mm are visible.  In contrast, an axon has a typical diameter of 50 microns.  Thus, hundreds, probably thousands of adjacent axons would need to be clustered together before that pathology would show up as even a tip of a pen sized spot on an MRI.

Despite the limitations of a camera that uses magnets to see through skin, bone and tissue to see something so small, Dilated Perivascular Spaces on a 3T scan are no longer a vague bright dot. The 3T MRI can give that spot definition –  measure its size and distinguish its shape. Further, because of the pattern of where those Dilated Perivascular Spaces appear, a neuroradiologist may be able to distinguish between the type of dilated spaces that can be caused by trauma, from the type that come from other disease processes.

Below is a portion of an MRI report where the Dilated Perivascular Spaces were opined to be consistent with brain injury and shearing:

A single MRI focus of shearing injury, associated with perivascular space enlargement, is similar to the punctuate hemorrhages seen on the initial CT scans. The location and appearance of this abnormality on the current MRI scan is most consistent with closed head injury and shearing trauma to the brain. Such shearing trauma is often associated with diffuse axonal injury (DAI).